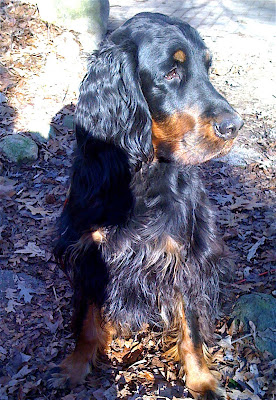 I turned three years old yesterday! I am a big boy now. Barbara says she has great plans for me this year and will help me to get letters after my name. As long as it involves treats and toys, I am up for it.

I celebrated my birthday by going on a nice outing with Barbara and then she gave me a slice of roast beast! Very delish. She also sang "Happy Birthday" to me which I enjoyed (Niamh does not like it when Barbara sings) and I gave her some smooches. Then we went to play with my girlfriend Scout. A very nice way to spend the day.

Happy New Year to you all from Niamh and Ambrose!
Posted by Niamh at 8:30 AM 8 comments:

Merry Christmas to all our dog blogging friends! We have been very bad about posting this year, especially lately. It is not that we haven't been doing fun things, it is just that Barbara keeps forgetting to take pictures of us doing them. It is all her fault! I have been in two holiday parades and Ambrose has been a demo dog twice. I have a new, much younger, Border Collie boyfriend and even Ambrose has found another girl dog willing to play his bashy games.

Here are some pictures from our Christmas photo shoot. 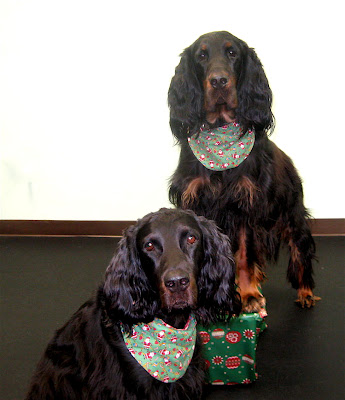 Barbara wrapped a big box for us to stand on. The idea was that she would take pictures of us with both of us up on the box but I refused to stand on the box if Ambrose was on it! Can you imagine the amount of cooties I would have gotten from him? 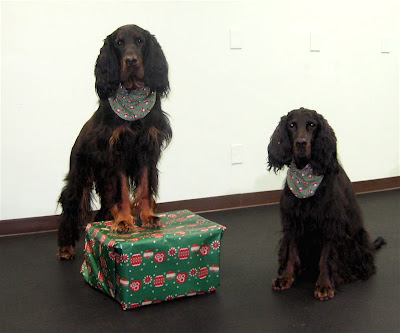 I wanted to be as far away from him as I possibly could be and still be in the picture. 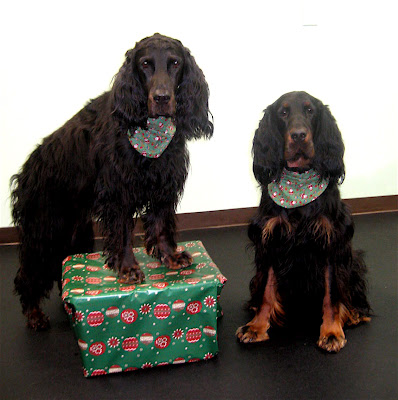 Merry Christmas and Happy New Year to you all! We will catch up on all of your blogs and promise to make Barbara post more in 2012!
Posted by Niamh at 1:43 PM 7 comments:

Niamh
I am a five year old Gordon Setter. I have a very busy social life and I am learning to track and perform canine freestyle and Rally obedience. I have a younger brother named Ambrose and I let him blog sometimes.