I am always up for a trip to the dog park and I am always on the look out to add new boyfriends to my pack of admirers. So when Barbara said that we were going to go to the dog park to work with one of her students I was very excited.

Henry is a 2 year old Labradoodle that was just recently adopted to a wonderful family. I don't think he had the proper socialization when he was a puppy because he is very sensitive and he never really learned to play. His new person was concerned that Henry didn't enjoy himself at the dog park. Since I have excellent play skills and clear body language, Barbara thought I was just the dog to bring Henry out of his shell. 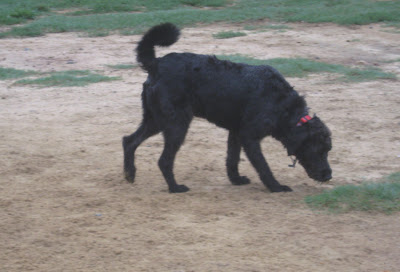 Henry came into the park but didn't interact with the other dogs and only wanted to sniff around. If other dogs came near him, he walked away. 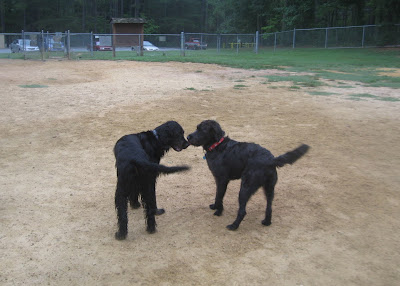 I came up to him and we sniffed politely at the side of the face. Notice my low, sweeping tail wags and curved body position. I would never be so rude as to come straight on to another dog's face and stare at them. 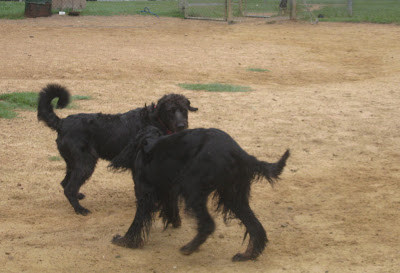 I gave him a play bow so that Henry would know that everything that I was going to do was all in fun. 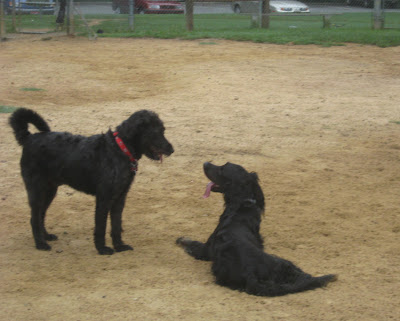 Then I lay on the ground to make myself as non threatening as possible and to do a little flirting. 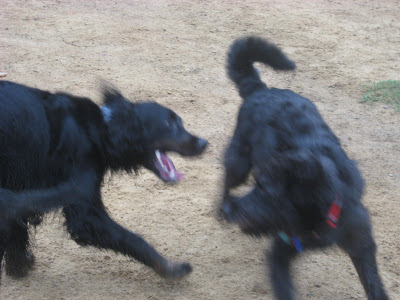 Finally Henry realized it was ok to play with me. We had a few excellent chases and even a little chew-face game. His person was so happy to see his tail wagging. We had such a good time that it even gave Henry the confidence to go up to some other dogs. I think that Henry is going to be a social butterfly after a few more dog park outings!

But flirt that I am, I was not satisfied with one new beau. I also attracted the attention of a young male Brittany named Truman who seemed quite taken with me. 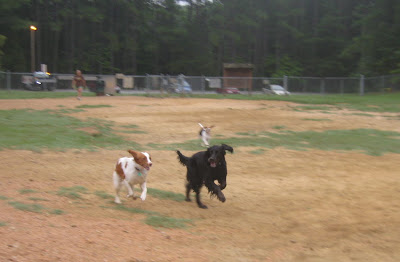 I was a little concerned that after my spaying operation boy dogs wouldn't be so attracted to me. Fortunately that is not true. I guess when a girl's got it, she's got it!!
Posted by Niamh at 9:58 AM 14 comments:

Last Wednesday Barbara drove me to K9 Kindercare, my home away from home, because she was going to visit family in NY. I wanted to go until I heard that she was flying there. I have no desire to sit in a crate in the belly of an airplane. She picked me up this morning and I could tell that she had been with my cousin Coby since her suitcase smelled of Cockapoo. 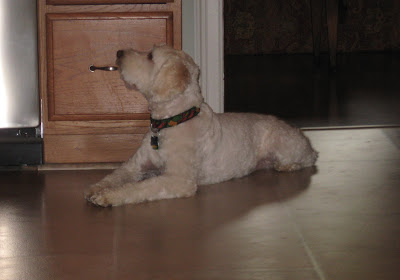 My Aunt Debby and her family adopted Coby from a shelter last Thanksgiving and they adore him. Who knows why he ended up in the shelter because he is such a great dog. I was a bit miffed to hear that Barbara paid a lot of attention to Coby and took him for a walk, played tug-of-war and gave him lots of treats.

Debby had a big picnic while Barbara was there and lots of their cousins came. Coby had a great time playing kickball with all the little kids in the big fenced yard. I wish I was there for that. 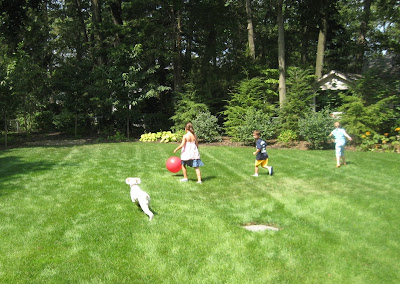 What I am most sorry to have missed though, was the feast. I see that they had fried chicken, barbequed pork roast and cupcakes!! Coby was right there in the thick of things waiting for food to drop on the floor and I know for a fact that Barbara gave him some fried chicken. I am so jealous. I get treated very well at K9 Kindercare but they have never barbequed a pork roast for me. 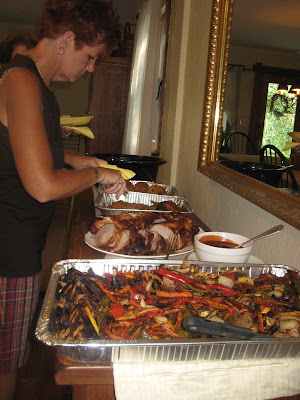 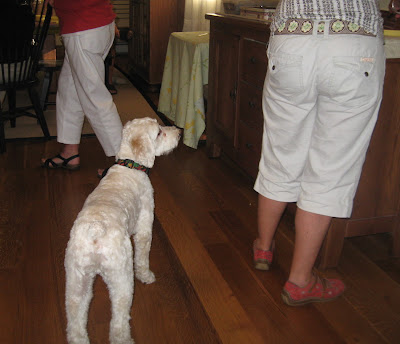 Anyway I am back home now, tired out from playing with my friends at the kennel. I really need to rest up because tonight is Rally class.
Posted by Niamh at 9:28 AM 10 comments:

Thank you to all who sent good wishes after my spay operation and during my recuperation. I am completely recovered and back to all my activities of Rally, freestyle and playing with my boyfriends. Unfortunately my person has been remiss in posting to my blog because she keeps forgetting to bring the camera when we do fun things!

We went to the dog park this evening before Rally class. My friend Ayla is in the class and Barbara and Sandi thought it would be a good idea for us to run out our silliness before class. 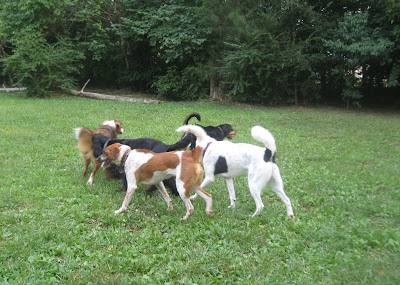 I am having a good sniff with Ayla, Nate, Bing and Minnie. We all get along very well. 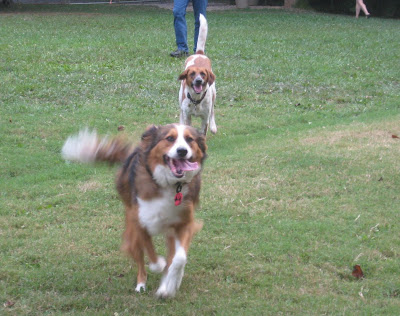 Ayla and Minnie running towards me. 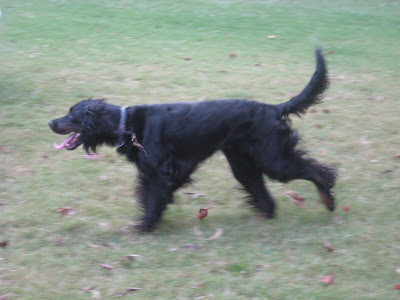 I am enjoying the freedom to run around and sniff.


I have been enjoying the photos of all you dogs in the Paw-lympic events. Congratulations to all the medal winners. I am very annoyed that Barbara didn't submit any of my photos. My specialty is the tongue event. I could have been a contender! 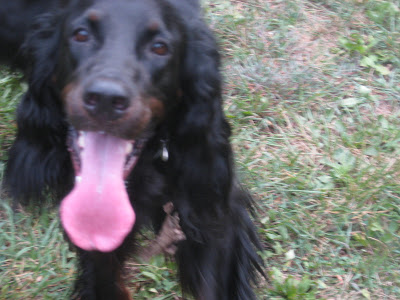 My operation was a week ago today and I am feeling great! I was pretty sleepy all day last Friday but by Saturday afternoon I was ready to run around. Unfortunately I am on restricted activity for 10 days - no running or jumping, no swimming, no dog park! This is cruelty to animals. All we have done lately are some sedate walks (very boring) and a little bit of Rally practice.

I wore my T-shirt and was a good girl and did not chew or lick my incision. That meant I did not have to wear the dreaded satellite dish on my head.

They shaved my belly at the vet clinic to do the operation (very nice and cool in all this heat) and I now have a scar and a tatoo!!! 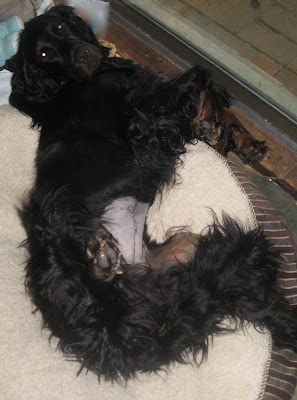 Here is a closeup. I wish the tatoo was in a shape of a dog biscuit though. 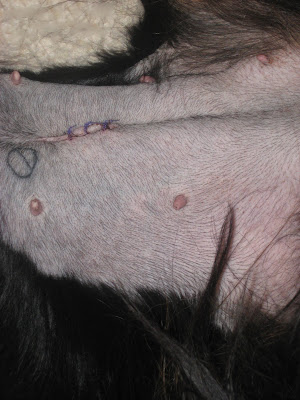 All I need now is an eyebrow piercing and I will be a punk rock Gordon Setter.
Posted by Niamh at 9:52 AM 17 comments:

I had an operation yesterday. We got up early, Barbara didn't give me any breakfast (cruelty to animals) and off we went to the vet. They were very nice there, but then I went to sleep and when I woke up I felt very groggy and my tummy hurt. I was spayed. It is an operation so I won't have puppies.

I wasn't spayed when I was younger because Barbara thought that I might do well in dog shows like my mom and dad and some of my littermates. But I really don't like posing at dog shows. It is more fun to do tracking and rally. Performance dogs can be spayed. My mom Misty had 9 of us pups and it was a lot of work for her to feed us, clean us and teach us to be good pups. I think having puppies would cut into my busy social life.

So I'm pretty tired today and I have to wear a T-shirt so I don't chew my incision. It is that or wear a satellite dish on my head. I'm going to rest today and catch up on all my friends' blogs. I'm not looking my best so there are no pictures today.
Posted by Niamh at 8:07 AM 17 comments:

Niamh
I am a five year old Gordon Setter. I have a very busy social life and I am learning to track and perform canine freestyle and Rally obedience. I have a younger brother named Ambrose and I let him blog sometimes.